When it comes to VoIP service, there’s not a more resounding name than Skype. Skype has become a staple of online communication, with millions of users worldwide. However, in recent years, some countries started blocking this service, preventing its use altogether. With a VPN, you can fix this issue and enjoy chit-chatting with your friends. Our top VPNs for unblocking and making Skype calls freely are below.

Without wasting your time, let’s delve deeper into the topic right away. This VoIP platform is sometimes hard to unblock, but with our top 3 picks, you’ll have no problems accessing your favorite communication tool. 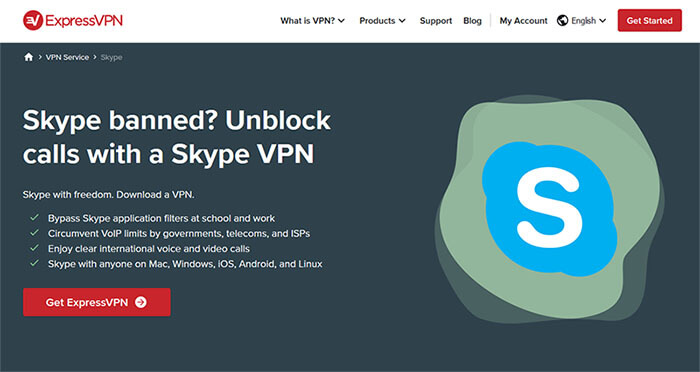 ExpressVPN is the most relevant provider in the VPN industry. For us, this is the best option on the market you can get, due to its numerous features and impressive speeds. The provider packs 3,000+ servers in 94 countries around the world, making it easy to unblock Skype wherever you are.

Furthermore, its speeds are the fastest around, allowing you to enjoy stutter-free video and voice calls. Given that Skype isn’t the service that respects your privacy the most, this VPN will come to your rescue. It has 256-bit AES encryption with an automatic kill switch, to ensure maximum privacy and security.

Being based in the British Virgin Islands, ExpressVPN maintains a crystal-clear zero-logging policy. This means that you can engage in chatting with friends about everything you want, knowing that no logs will be stored on ExpressVPN’s servers.

Unblocking sites/apps/services is a piece of cake for ExpressVPN. Apart from this platform, you’ll be able to unblock streaming platforms such as Netflix, HBO GO, Prime Video, and Hulu. For more demanding users, the provider gives 5 simultaneous connections on a single account.

Lastly, if you’re worried about the price, know that the provider offers a 49% discount and 3 months free for an annual plan. If it’s not to your liking, you also get a 30-day money-back guarantee. Feel free to read our complete review of ExpressVPN on our site.

NordVPN comes with a plethora of features that will impress even experienced users. The provider has very good apps for all platforms, allowing you to use your VPN on iOS, Android, Windows, macOS, and Linux. With every platform covered, enjoying Skype anywhere in the world is guaranteed.

Speaking of that, NordVPN is capable of unblocking it, as well as preserving your privacy at the same time. It uses military-grade encryption in conjunction with DNS/IP leak protection. Moreover, with the introduction of the NordLynx protocol, your connection will be as fast and secure as possible.

This Panamanian provider has 5,600+ servers in 60 countries, giving you leeway for bypassing geo-restricitons. And if you live in China, you can avoid using the notorious TOM-Skype (more about that later), thanks to obfuscated servers.

You’ll like that it offers unlimited bandwidth, which will let you use video or voice chat endlessly. Price-wise, NordVPN is on the more affordable side in the long run. To accompany the price, there are 6 simultaneous connections and 24/7 live chat support.

We suggest getting its 3-year plan that will let you fully take advantage of what the provider offers.

Get NordVPN to Use Skype without Restrictions >

CyberGhost is stationed in Romania, where it operates 7,000+ servers in 90 countries. These are pretty big numbers, but they’re also accompanied by the astonishing performance you get. Needless to say, the VPN easily unblocks Skype and lets you enjoy buffer-free calls due to its lightning-fast speeds.

Its Romanian jurisdictions allow it to maintain a clear no-logging policy, which will give you much-needed privacy online. To top it all up, CyberGhost uses 256-bit encryption which wraps your connection in a VPN tunnel, preventing anyone from tracking your activity.

Dedicated servers for streaming and torrenting are also here. However, aside from torrenting, CyberGhost will unblock a huge scope of streaming platforms, as well. With intuitive apps for every platform, it’s highly likely that you’ll never have any problems.

The selling point of CyberGhost is its affordability. It’s the cheapest of the bunch, yet doesn’t cut any corners. Sure, it doesn’t work in China, but that’s a small price to pay for a price this low. Its 3-year plan is the best option, as it gives you 2 months completely FREE.

Free VPNs for Skype – Do They Work?

Free VPNs for Skype work in terms of unblocking the platform, but not always.

However, unblocking this platform isn’t the biggest issue you’re going to face. Free providers offer very limited features, so you set yourself up for a plethora of problems later on. First off, they usually give limited bandwidth, which is no good for any VoIP service.

As you know, video and voice calls are bandwidth-hungry, so they’ll quickly waste the allowed bandwidth. Skype, as we said, isn’t exactly privacy-friendly and we can say the same about free VPNs.

They monitor your activity, collect personal info, and send it to third parties. You want to avoid them whenever possible and focus on the premium VPN providers instead.

Although the service is still available pretty much worldwide, some countries imposed a ban on it not long ago. Most notable countries that completely banned Skype are:

Conversely, there are some countries that don’t abide by this rule totally. In other words, in the countries below, Skype is blocked by some ISPs, while some ISPs still allow you to use, or different versions of the service (see TOM-Skype). There are a lot of countries, so we’re going to mention some of the most notable entries:

If you’ve read the article carefully, you’ve already seen that we’ve mentioned TOM-Skype a few times. Before we wrap things up, we need to warn you about this malicious software. TOM-Skype is China’s version of this program that allows the government to conduct surveillance and spy on your activities while in the app.

With this app, they can spy on your conversations, voice, and video calls, therefore, violating your privacy. The worst thing is that you can easily fall into this trap if you’re from China. When downloading Skype from Microsoft’s Store, it is going to be TOM-Skype by default.

But, with a VPN, you can change your online location to any other country and download a regular version of Skype application. If you’re from this country or you’re traveling there, we strongly suggest getting a Virtual Private Network.

Then, you just need to connect to the server in another country, visit Microsoft Store, and download Skype. Now, you should have a regular version of the program, which is slightly more privacy-friendly.

Or at least, the Chinese government won’t be able to snoop around you… unless Microsoft allows it to do so.

Staying anonymous and secure online should be your top priority when using Skype. With excessive government surveillance and censorship in some countries, doing so is impossible without a VPN.

Our suggestion is to get ExpressVPN and fix all the potential issues. It’s a perfect provider for privacy and security, also capable of unblocking this popular VoIP platform.

A provider like this will also help you access blocked sites, download torrents safely, and enjoy unlimited internet freedom. Simply put, a few dollars a month is just a small price to pay, compared to all the benefits you get.