When we talk about streaming platforms, we always think about Netflix first. Sure, Americans have galore of these platforms but they’re not the only ones. India, one of the largest countries in the world, has a platform called Hotstar. This platform is home to hundreds of quality TV shows and movies. Yet, as is the case with most of these services, it’s geo-restricted, so you can’t access it from every country. Indians, pay close attention – you’re going to learn how to unblock favorite Indian shows from abroad!

Hotstar Error Message – Why Does It Happen?

Let’s make something clear. Hotstar is an Indian platform but it is, for example, available in the USA. While it’s free for Indian residents, those from the USA can’t use it for free. And if you’re from Europe, you won’t be able to access it at all. In that case, you’ll get this message:

Since our focus is to help people from India unblock their favorite shows abroad, we’ll focus on that. For now, let’s just explain this error briefly. As you can see, the platform isn’t available in Europe. This is because of the copyright.

The platform is licensed to work in India and can, in some cases, display certain shows in the USA, for which its residents need to pay. Licensing issues are very complex, hence the platform can’t violate them. Otherwise, it will lose millions of dollars when it gets sued.

In short, the error message will appear if you’re not from one of the supported countries. To fix this geo-restriction, you’ll need to get a VPN that is working in India. This service will let you change your online location, thus access it as if you were located in this country.

And if you’re questioning its legality, don’t worry, it’s perfectly legal. Just beware that not every VPN will unblock it successfully. This is why we made a special list of those that will. Before we talk about that, we’ll talk about how to unblock the platform using this service.

How to Use a VPN to Unblock Hotstar from Abroad?

Virtual Private Network clients are some of the simplest apps to use. You only use one or two buttons for connection and that’s all. Before you can use one, you’ll need to buy a subscription from the provider of your choice.

We recommend ExpressVPN for this purpose. It’s very fast and unblocks every geo-restricted platform. On top of that, it offers a 49% discount and 3 months free for a 12-month subscription plan.

Next, you’ll need to download and install the apps. We assume you’ll be watching Hotstar on a big screen, so use the Windows, macOS or Linux app. Log in with your credentials and you’ll see the app’s home screen. 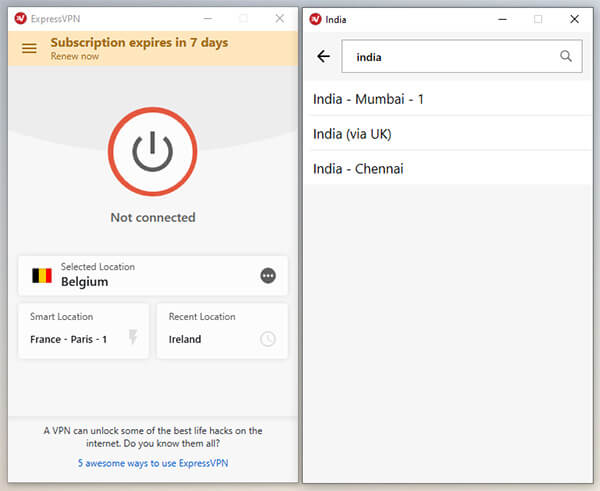 Now that you’ve established a connection, enjoying your favorite Indian shows on Hotstar from abroad is easy.

As we promised, before we answer some more questions, we’ll give you our list of best VPNs in order to watch Hotstar from outside India in 2021. What are you waiting for? Scroll down to see it! 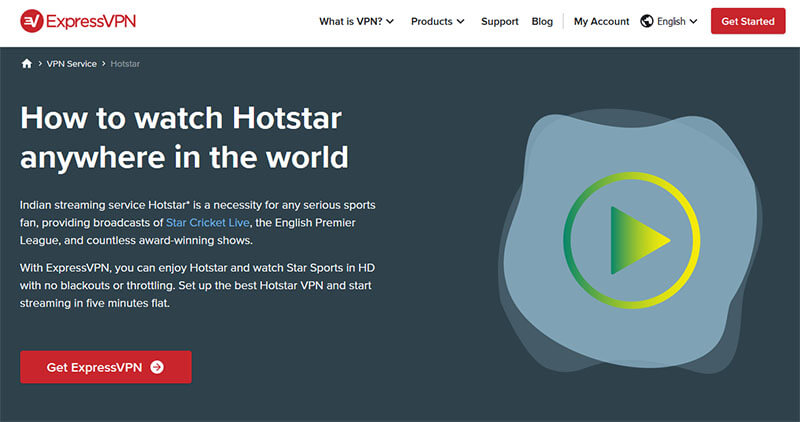 ExpressVPN offers 3,000+ servers in 94 countries worldwide. In India, you can expect two physical locations, Chennai and Mumbai, as well as one virtual server (via the UK). These servers are blazing-fast, so you can enjoy Out of Love or Nazar buffer-free!

You’ll also love its simplicity and ease of use since it lets you connect in two or three clicks. Security-wise, ExpressVPN is a champ. It doesn’t store logs and has 256-bit AES encryption for your connection. There’s a kill switch and to prevent IP leaks, there’s IP and DNS leak protection.

Split tunneling is also here, so you can use your fake and your native IP addresses at the same time, for different purposes. Indians will love 24/7 support that’s, by the way, one of the best in the business. ExpressVPN also supports routers, so you can wrap your entire house in a powerful VPN shroud.

Stream Hotstar from Abroad With ExpressVPN >

NordVPN has a huge server network of 5,600+ servers in 61 countries. India has been graced with 32 fast P2P servers for enjoying torrenting and streaming. But, since you’re here for Hotstar, it’s nice to know that this provider can unblock it.

Those who love Netflix will also enjoy Netflix India, as it works flawlessly with NordVPN. The provider offers some staggering speeds and even has an ad-blocker called CyberSec. A Double VPN feature is here, allowing you to route your traffic through two different servers, for added security.

For streaming lovers, NordVPN has SmartPlay technology, allowing you to stream safely on any device. Speaking of devices, the provider supports every major platform and six simultaneous connections.

There’s a 30-day money-back guarantee and 24/7 customer support, which lets you easily request a refund if you need it.

Get NordVPN for Hotstar >

CyberGhost is an amazing option for Hotstar, due to its high speeds and dedicated streaming servers. Have no doubt that the provider has a lot of servers in India. There are 22 of them in Mumbai and they support P2P.

We always recommend this provider to beginners and now, it’s the same. It has an intuitive interface and will not break the bank if you buy it. For example, its 3-year subscription costs less than a coffee in your local Starbucks!

For this price, the provider offers more than any of you would expect. A no-log policy, military-grade encryption, NoSpy servers, DNS and IP leak protection, and even an automatic kill switch. Plus, if you don’t like it, there’s a 45-day money-back guarantee, which is the highest we’ve ever seen.

With 6,200+ servers in 91+ countries, you’ll be never left without options. Even US Netflix works fine, in case you want to rest from your favorite Bollywood shows.

Let’s answer some of the most commonly asked questions.

No, they can’t. Free providers are rarely successful in bypassing geo-restrictions such as these.  They can unblock some gambling sites but when it comes to Netflix, Hulu or Hotstar, that’s not going to work in a majority of cases.

Can I download the mobile app if I’m outside of India?

You can if you’re located in the USA. It will be available on the Apple Store or Google Play Store. You can also watch shows but only if you use a premium subscription. To enjoy Hotstar for free, you’ll need a Virtual Private Network.

Will a proxy server unblock Hotstar?

No, it won’t. As we said in some previous articles, a VPN is much more superior to a proxy server. Proxy servers don’t have any kind of protection, so your traffic can get intercepted by your ISP, government or this service.