Mexico is an exotic country that attracts thousands of tourists, despite its reputation for being dangerous. The country is well-known for its Jalapeño chili peppers, drug cartels, as well as their amusing soaps. However, when it comes to free internet access, you wouldn’t want to go there unequipped. A reliable, high-speed Virtual Private Network provider will always come in handy when hanging with your Mexican friends. That’s why we came up with a special list of best VPN providers for staying safe when going online in Mexico.

Why You Should Use a VPN in Mexico?

Before getting to the nitty-gritty of the topic, we need to see why you need to choose and use a good provider in this country. Believe us that thousands of Mexicans use a VPN, so don’t think they’re strangers to this kind of software. And if you’re traveling there, here are the reasons for using it:

As you might’ve guessed. The country with a high rate of criminals like this one is almost always required to monitor its residents. Although the reasons for this aren’t malicious, you still don’t want to be monitored while there. The government is keen on putting an end on gun smugglers and drug dealers, hence the required security measures are in place.

To be able to get additional info about those who mess with the law, the government issues an order to the ISPs around the country to monitor its residents. For what we know, your data is being kept for up to 2 years. So even if you don’t know what websites you visited a few months ago, the government does.

This is the so-called Telecommunications Law of 2014. With the government being able to browse through your internet activities, your security is threatened even if you’re just a visitor. Furthermore, any copyright lawyer can mess up with your life if you’ve ever violated any copyright on the internet, simply because they have your data at their thumb’s reach.

Luckily, the best VPN in Mexico with rock-solid security, isn’t going to allow that.

The country being part of North America doesn’t mean you will be able to access the most popular streaming or betting websites. Netflix, for example, is blocked in this country. HBO, Hulu, BBC iPlayer are all in the same ballpark and there are dozens of them that we aren’t going to mention.

Although the government doesn’t filter internet content, not being able to watch your favorite shows is a pretty big problem. But, we don’t blame Mexico for this.

In fact, we don’t have the right to blame them! This is Netflix’s or any other platform’s problem since they offer the best content only for the USA or UK, depending on the platform we’re talking about (Hulu and HBO are only available if you’ve an IP from the US for example).

You can still access them from this country but don’t expect all the latest and greatest stuff there. If you want that, you’ll still need help from the best VPN in Mexico. With it, you’ll be able to unblock bookmaker websites when abroad if you’re not all about streaming.

ISP throttling is a problem that can be encountered regardless of the country. You may have heard about it but let’s define it for those who haven’t. Every ISP has the right to slow down your internet speeds at certain points during the day or month.

Instead, it’s done to slow your internet speed if you’re using other streaming platforms.

Because of that, some of them are forced to pay a fee to the Internet Service Providers, so they can stop throttling when users watch them. Either way, using a VPN in Mexico can prevent this from happening by hiding your IP… and encrypting your trafic.

Public Wi-Fi networks are excellent for quickly checking out your social media profile while drinking coffee in a bar.

Hundreds of people each day connect their smartphones to these networks, which is a feast for hackers. Being unprotected and often not encrypted, connecting to public networks is extremely dangerous.

If someone wants to steal your data, it’s easiest to do it in places like this. A hacker would just sweep the network, gain access to anything he wants, and will disappear. This often happens in Mexico (and many other countries), and a VPN can definitely help you stay protected.

The Best VPN Providers with Servers in Mexico

Traveling abroad as a Mexican leaves you without your favorite TV shows. If you’re missing the famous “La Televisa Presenta” logo, we know how you feel. But, with these providers, it doesn’t have to be the case:

Getting these providers is a piece of cake. You just need to buy a subscription, download the respective apps, and start enjoying secure internet browsing. Now, let’s talk about free VPN usage in Mexico. Is it a good idea or not? You will have an answer right after.

Can Free VPN Keep You Safe and Secure in Mexico?

What about free VPN providers? Can you use them in Mexico and still remain 100% safe and secure? The answer is both yes and no. Although they’re free, the providers still have some of the standard security features. For example, 256-bit encryption and DNS leak protection. Some of them even have a no-log policy!

But, this applies only to some of them. In many cases, free providers store your internet browsing data, which they can sell to some third-parties and earn money. If you’ve ever wondered how they earn money out of this, here’s your answer.

To further spice up things, free providers come with bandwidth restrictions. These can go from 500MB to 2GB or 5GB a month, which is pointless if you’re doing anything special (streaming, torrenting), even casually browsing the internet. Of course, the speeds are slow as a snail, tampering your online experience.

Bypassing geo-restrictions is also not possible when we talk about Netflix and other high-caliber streaming platforms. So, free providers for this country (AND in general to be honest) are a definite NO.

The Best VPNs for Mexico

If you’re still wondering what the best VPN providers for Mexico are, we shall not waste a single second. Here are our top picks for Mexicanos:

And now, let’s review them and see why they’re so good in terms of features and speed. 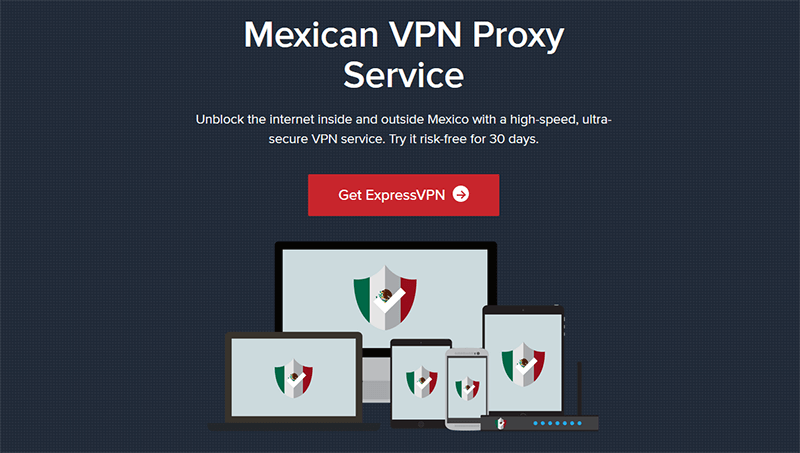 ExpressVPN is our top pick for this country for several reasons. First, it has a Spanish version of the website, which is great for Mexicans that don’t speak English or just want a native experience. Second, it has the best features for the price. Those who’ve heard about it, know how fast it is. We know, too – in our tests, this has been the fastest provider, regardless of the country we chose.

The provider is located in the British Virgin Islands, which isn’t a part of the 14 Eyes. This means that you get a zero-log policy and evade a sledgehammer called data-retention laws. Now, if you’re interested in geo-restrictions and unblocking them, ExpressVPN has the firepower of German howitzer from WWII.

Every geo-blocked website can be unblocked, giving you complete access to what the internet has to offer. All of this is accompanied by 256-bit encryption, DNS and IP leak protection, and a kill-switch. There’s even a split tunneling feature that works well with this provider.

If you have doubts about your internet security, you can always contact 24/7 customer support. We’ve contacted them a few times and they respond in no time. This is one of the strongest features of this provider.

Finally, ExpressVPN offers a 49% discount and 3 months free for a 12-month subscription plan. If you’ve decided to get it, now is the right time. The 30-day money-back guarantee is still here, so don’t worry.

CyberGhost was far from the best VPNs in Mexico the moment it was founded. However, when it was acquired by Kape, things start to change. The company saw massive growth and with its 6,000 servers worldwide, it covers almost the entire planet, including Mexico.

The great thing about this provider is its price. Not only it’s dead cheap but also reliable. Some say that being more expensive means being better… well, CyberGhost sinks that statement into the ocean. For example, you still get fascinating unblocking features. Hulu, HBO, and Netflix can all be unblocked, as well as Amazon Prime Video, for additional streaming sources.

Torrenting with this provider is as easy as a feather. With the P2P support, you can download torrents AND stay safe when doing so. For your safety, 256-bit, DNS and IP leak, and no-logs policy are the ones you should thank.

Although you can connect up to 7 devices simultaneously, CyberGhost also supports router, so you can cover the entire house. If that’s not a good deal, we don’t know what is.

Finally, we want to talk to you about NordVPN. This provider comes from the hot beaches of Panama and brings with itself a bag of feature-rich offerings. Yeah, we know that Panama isn’t very rich but this provider will change your opinion. What if we said that this is among the best VPN in the world and Mexico?

It can unblock almost every geo-blocked website and let you watch your favorite shows on Netflix. You don’t have to worry about your security while you do that because this is the most secure provider at this moment.

You get 2048-bit encryption, Double VPN, and Onion Over VPN features. Beware that these are only some of the features – there are dozens of them! Plus, there’s a strict zero-logs policy, so don’t be afraid to visit even “those” websites… if you know what we mean 😉

We’ve arrived at the end of the road and it’s time to see what is your best option. As mentioned above, Mexico isn’t the freest country when it comes to internet access. You’ll have to deal with geo-restrictions and constant government surveillance without a VPN.

But, if you’re willing to take our advice, we suggest using ExpressVPN in this country. ExpressVPN even has servers in India and 94+ countries around the world. It’s fast and can unblock every blocked website. Therefore, this should be your numero uno choice for this country.

You should now be able to see the well-known “La Televisa Presenta” logo even abroad! And many more other things!