If you’re a streaming lover, you’ve probably enjoyed countless hours on Netflix. This is the world’s largest streaming platform, with thousands of shows and movies at your disposal. Japanese Netflix is a great catalog for enjoying not only movies but also quality anime shows that Japanese residents appreciate. Living outside this country means that you can’t access it, but with our solution, that won’t be the case anymore. Let’s see how to watch Netflix Japan catalog easily from anywhere in the world.

How to Unblock & Watch Japanese Netflix?

Netflix has a special catalog for each country it’s available in. Users from the US have the largest one, although even that catalog doesn’t have all the available shows. Now, the Japanese version is pretty large, as well, including some shows that US users can’t watch.

Unblocking another Netflix catalog is pretty simple and can be done in two ways. You can either move to another country or use a VPN. The first option is very expensive, while the second one will cost you merely a few bucks a month.

You’ve already made your choice? Good.

A Virtual Private Network is a service that allows you to change your online location, thus access geo-restricted platforms. On top of that, it lets you browse the web anonymously so that no one can track your online activity. Here’s how to use it to unblock Japanese Netflix:

Before using a provider, you must first subscribe to it. The best VPN for this purpose is ExpressVPN, as it easily unblocks this catalog and offers great speeds for streaming.

Get ExpressVPN to Unblock all the Netflix catalogs >

As soon as you subscribe, you’ll get the option to download the apps you need. Download the setup file, install the app, and run it. Once you’re in the app, sign in with the credentials you provided when registering and the app will take you to the home screen.

3. Connect to a Server located in Japan

To find the Japanese server, you need to open the server list. You can do so by clicking on the country underneath the connection button. The server list will open on the right, so scroll down and find Japan.

Click on it to see the available servers in the country, and then, click on the server you want. Use the connection button to establish a VPN connection.

You now have a Japanese IP address, which will allow you to access the Netflix catalog from this country. Very easy – as we promised!

The trick with this platform is that not every provider can unblock it. Therefore, we came up with the list of three best VPNs for this purpose:

ExpressVPN unblocks every Netflix catalog with ease. Thanks to the fastest speeds on the market, you’ll easily be able to enjoy your favorite shows, even in 4K, on your Premium subscription plan.

The provider offers 3,000+ servers in 94 countries, with lots of servers in Japan. This is one of the largest server networks that allows for bypassing geo-restrictions easily. You can connect to the US server and unblock the US catalog if you want, or perhaps platforms like HBO GO, Hulu, and Prime Video.

You’ll like ExpressVPN due to its simplicity, as well. It offers intuitive apps for Windows, iOS, macOS, Linux, and Android. With up to 5 simultaneous connections, the provider will let you watch Netflix on every device in your household.

To make things better, you get 24/7 customer support that replies almost instantaneously. This will let you solve the potential issues in no time, even when it comes to unblocking sites and platforms.

ExpressVPN offers a 49% discount and 3 months free for a 12-month subscription plan. If you don’t like it, a 30-day money-back guarantee is in place. 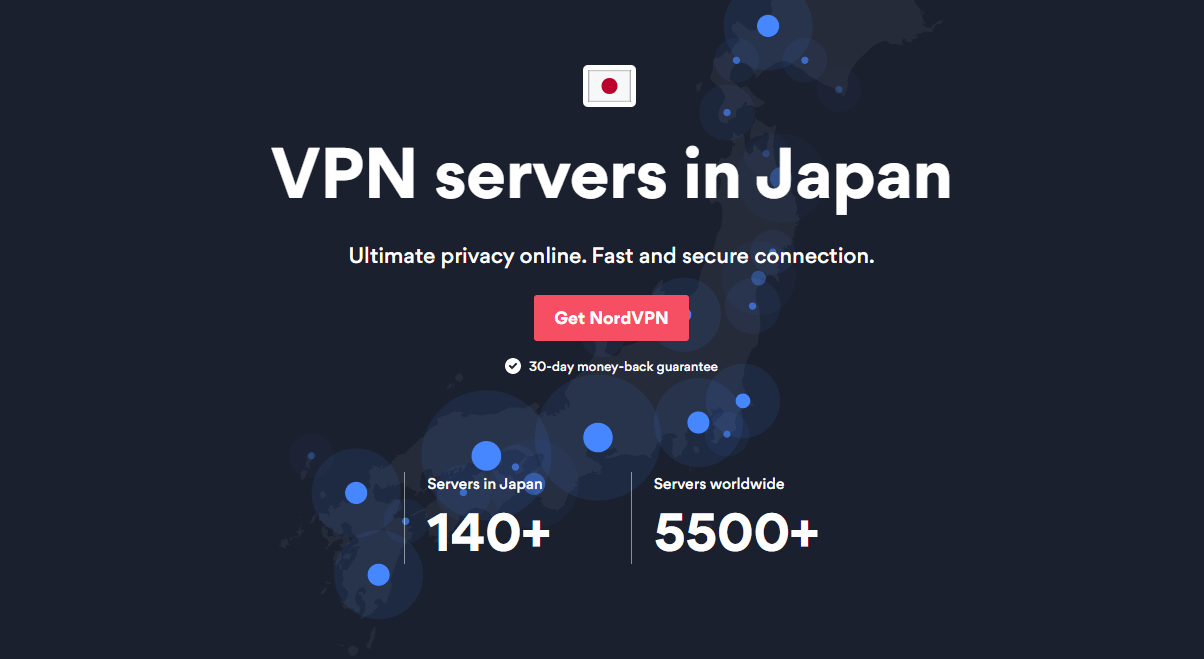 NordVPN is a simple, yet powerful VPN provider that packs 5,600+ servers in 60 countries around the globe. It has more than 140 servers in Japan, which lets you enjoy fast speeds and stable connections whenever you want.

This provider is focused primarily on security, although it’s a pretty good streaming VPN. We managed to unblock platforms like Hotstar, Disney+, and DAZN with it, but also enjoy torrenting due to its military-grade encryption.

NordVPN lets you use its dedicated servers, Double VPN, and even obfuscated servers for people in censored countries. For blocking out annoying ads, the provider includes CyberSec, a functional ad-blocker that will make your browsing experience better (and faster!).

With up to 6 simultaneous connections, this VPN will surely satisfy your needs to a full extent. Oh, and you also get a free trial for mobile platforms, so try it now and see how feature-rich experience you’re gonna get!

The last choice on the list is CyberGhost. Despite taking the third spot, the provider is as phenomenal as it gets. For the price, this is the best VPN around, providing premium features while saving your money. You can also use it to save huge chunk of money on your Netflix subscription.

CyberGhost is great at unblocking Japanese Netflix and giving you a great streaming experience due to blazing-fast speeds. Furthermore, there are dedicated servers for streaming that will effectively unblock platforms like HBO GO, Disney+, and BBC iPlayer.

For those worried about privacy, the provider is based in Romania, a country that respects your online freedom. On top of that, the provider uses 256-bit AES encryption and an automatic kill switch to protect your connection.

If you’re all about saving money, CyberGhost is an amazing option. You get a 3-year plan for a very cheap price AND 2 months free on top of that. Not to mention a 45-day money-back guarantee that screams generosity!

Japanese Netflix is a very quality catalog of movies, shows, and anime that you’ll surely enjoy. If you ask yourself how to watch anime in Japanese on Netflix, this is your perfect solution.

Our recommendation for unblocking this catalog is ExpressVPN. It is the only provider that will reliably unblock pretty much every catalog you want. With its impeccable security and a plethora of servers worldwide, this will be your perfect VPN companion for years to come.

🎥 How many movies and series are available on Netflix Japan?

At the moment, Netflix Japan is offering: 3400+ movies, and 1800+ series. To have all the details, you can visit a site called Unogs. But you should know that in order to get access to Netflix Japan (if you’re not currently in Japan), you will have to use a quality VPN like ExpressVPN. It is absolutely mandatory.

📺 What Japanese shows are on Netflix?

There are a lot of Japanese shows and movies available on Netflix. Here are some of them : Good Morning Call, Switched, Erased, Terrace House, The Naked Director, and so on…

❓ How to get a Japanese VPN for Netflix?

⚠️ Can I use a free VPN to watch content from Netflix Japan?

If possible, really avoid using free VPNs – to our knowledge, none are able to give you access to the Japanese Netflix catalog. It’s as simple as that. If you want a free VPN at all costs, take advantage of the 30-day free trial offered by ExpressVPN.