If you’re from Australia, there’s no way you haven’t heard of SBS. This platform is known for its engaging shows that millions of people in this country like. Unfortunately, as is the case with many streaming platforms, this one is available strictly for this country. But, not everything is so grim. For all of you outside of Australia, we made a special guide on how to unblock and watch SBS from anywhere in the world. That being said, you’ll want to stick with us till the end!

SBS Error Message – Why Does It Appear?

Streaming some fun shows after your day at work is surely an activity we all like. But, when we get a message like this…

… it’s not exactly the best feeling in the world. If you’re not from Australia and you try to stream a certain show, chances are that you’ll get this kind of message. Now, the question is – what does it mean? Simply put, it’s a message that tells you that you can’t stream the particular show because you’re not from this country.

As we said, SBS On Demand platform is available only to Australian residents, and because of copyright, they can’t broadcast the show for you. This problem, however, can easily be fixed. Sure, you can rent an apartment in this country and live there but there’s a much better solution – buy a VPN.

This solution costs a few dollars a month and lets you watch any show you want on this or any other platform. Wondering how it works? Well, you might as well scroll down a bit.

Whether or not you’ve heard about this software, you know it’s very powerful, especially for the price. VPNs usually cost a few dollars on a monthly basis, yet let you reclaim your internet freedom. Not only does this service keep you safe and anonymous online but it also lets you bypass geo-restrictions.

The way it does this is by letting you connect to a remote server in a different country. It can be a server in Australia, for example. You click on it, get an Australian IP address, and now, the site you want to visit sees you as if you were from this country.

Sounds fancy, huh? Now, you can do it in a few simple steps! Check our guide below.

How to Unblock SBS Outside Australia?

Unblocking and watching SBS from abroad is easier than a feather and even if you’re not a tech-savvy person, you’ll do it in the first attempt. Here are the steps:

The great thing about SBS is that it’s a free platform. Unlike Netflix that forces you to pay a subscription, here, you just need to sign up and that’s it. Do that and proceed to the next step.

Why ExpressVPN? Well, many VPNs can unblock this platform but since you’re going to stream, you’ll need a blazing-fast provider like this one. It’s also our top choice for 2021 and offers a flawless VPN experience.

Upon buying it, the provider will offer you to download the apps you need. It supports all the major platforms, so don’t hesitate to equip them with the weapon of geo-restriction destruction.

4. Connect to the Australian Server 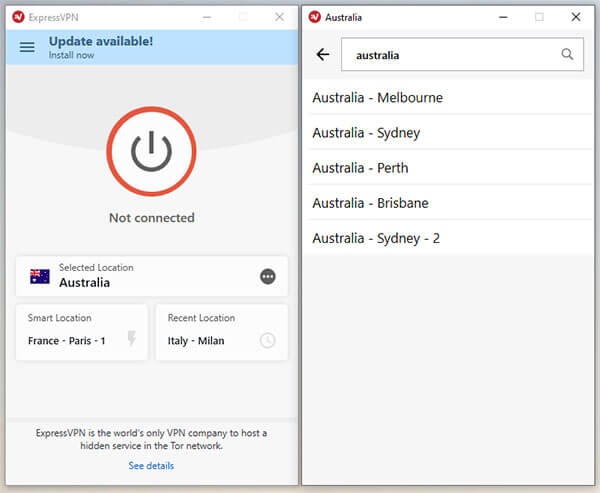 Wait for a few seconds and boom – it’s done 🙂

Get your Coke Zero or whatever you want and enjoy your favorites show. You deserve it!

Best VPNs to Watch SBS from Anywhere in the World

To make life even easier for you if you’re currently outside of Australia, we found 3 VPNs that will unblock SBS from anywhere in the world easily. Here are our best picks:

ExpressVPN is a true powerhouse. It has abnormal speeds, impeccable security, and outstanding customer support. Nothing is perfect, that’s true, but this provider is an inch away from it. Nevertheless, the provider offers 256-bit encryption, to obfuscate your presence on the internet, and on top of that, it unblocks every streaming platform.

Netflix, Hulu, HBO GO – they’ll all be at your disposal! ExpressVPN also has 3,000+ servers in 94 countries, making it great for accessing local content from different countries. We like the addition of split tunneling and Onion Over VPN for using the provider with Tor.

Finally, you get 24/7 live chat support and up to 5 simultaneous connections on a single account. ExpressVPN is nothing short of perfection!

NordVPN focuses mainly on security and bypassing geo-restrictions, which it does great. First of all, it has 5,600+ servers in 60 countries. Furthermore, it doesn’t keep logs since it’s from Panama, leaving you to wander on the internet as much as you want.

The provider unblocks every major streaming platform and watching SBS from outside Australia with it will be a breeze – of course, because of its speed. There’s a feature called SmartPlay, which greatly enhances your streaming, and CyberSec, for blocking these annoying ads and pop-ups.

For additional security, there’s military-grade encryption and an automatic kill switch. Accompanied by unlimited bandwidth and top-grade customer support, NordVPN is a force to be reckoned with!

CyberGhost is a Romanian behemoth with 7,000+ servers worldwide. They’re spreading like a plague! Not to mention how good they are in unblocking geo-blocked sites, such as SBS or 10Play, for those sports lovers.

The provider has a strict zero-log policy and is far away from the 14 Eyes jurisdiction. This grants maximum security, in conjunction with the strongest encryption and IPv6 leak protection. CyberGhost offers dedicated servers for streaming and torrenting, so you can use the internet however you want.

We need to mention how cheap it is. Its 3-year plan is really affordable and if you’re snooping in for a cheap solution, CyberGhost should definitely be on your go-to list.

Stream SBS On Demand With CyberGhost >