If you’re living in Australia, you know that this country is free in terms of internet access. Sure, you can even enjoy Netflix Australia, but this catalog is smaller than the American one. Demanding users will like to get a full experience, and as such, they’ll want to unblock and watch Netflix US content from Australia. That’s very easy and can be done in a few simple steps. Stay with us to learn how to do it and see what are the best options for this purpose.

How to Unblock Netflix US from Australia?

Unblocking platforms in other countries seems like an impossible mission for many users online. They see that it doesn’t work and they give up. There’s a good reason why Netflix US isn’t available in Australia – because of licensing issues.

But, what if we told you that you can bypass these issues completely legally? That sounds good, doesn’t it? Well, the only way to do that is by using the best VPN possible. It lets you change your IP address to the United States, for example, and watch channels such as ABC, AMC, ESPN…

Of course, you’ll also unblock Netflix US and other platforms from this country. But you will need to pick the right one, and don’t go for free options 😉

The first step is to subscribe to a Virtual Private Network of your choice. With dozens of providers worldwide, it’s hard to choose the one that’ll serve you well. For that purpose, we’ll recommend ExpressVPN, the best one on the market.

You get a 49% discount and 3 months free for a 12-month subscription plan here.

Buy it, download the setup file, and install the app. This process lasts about a minute and after that, simply sign in with your credentials.

3. Connect to an American (US) Server 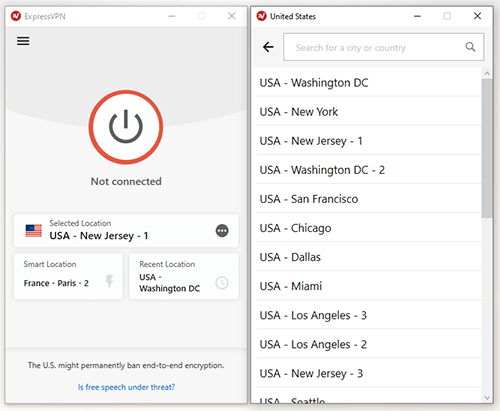 The final step is to enjoy Netflix US as intended. Simply type in the address of the site and it will automatically connect you to the US version of it. Here, you have complete freedom to enjoy your favorite shows.

Best VPNs for Unblocking and Watching Netflix US from Australia

Wondering what are the best VPN choices for accessing Netflix US in Australia? Don’t you worry, we got you covered. Here are our top 3 picks:

ExpressVPN is, in our opinion, the best VPN provider on the market. It’s already known that it has the fastest speeds, and luckily, speeds aren’t the only thing that this provider has. We managed to unblock Netflix US while being in Australia easily, but also Disney+, Hulu, HBO GO, and ABC.

Australians will love ExpressVPN for its rock-solid security, too. The provider uses 256-bit AES encryption and a kill switch, should the connection drops. IPv6 and DNS leak protection are also here, making sure that your anonymity never takes as toll.

Moreover, ExpressVPN doesn’t store logs, making it ideal for people concerned about privacy online. Lastly, you can protect up to 5 devices simultaneously, which is great for unblocking Netflix on your smartphone, tablet, laptop, and other internet-capable devices.

With 24/7 support, ExpressVPN stands by your side both in good and bad.

Enjoy Netflix US in Australia With ExpressVPN >

NordVPN offers good performances in Australia. In fact, it’s among the best providers for this country, packing 5,700+ servers in 59 countries worldwide. Our tests showed that it’s very fast for streaming and torrenting, making it great for more demanding users.

Streaming-wise, NordVPN will unblock every platform you want. You can unblock Netflix from Australia but also 10Play from the USA if you want so. The provider uses the SmartPlay technology for streaming. It combines SmartDNS and VPN-like security for a perfect experience.

The addition of an ad-blocker is also welcome, and so is Double VPN, filtering your traffic through 2 different servers. Being from Panama, NordVPN doesn’t store logs, so you can enjoy knowing that your data will never fall into the wrong hands.

Get NordVPN for Watching US Netflix >

CyberGhost is a Romanian provider that offers insane value for the money. For the start, you get 7,000+ servers worldwide, which is as impressive as it gets! These servers offer very fast speeds that are perfect for streaming Netflix US from abroad.

Speaking of that, CyberGhost unblocks other streaming platforms and has dedicated servers for streaming. We like the addition of an ad-blocker, too, as well as the option to change security protocols. Security-wise, the provider uses military-grade encryption and if the connection drops, there’s a kill switch to fix things.

Those who don’t want to break the bank will probably choose CyberGhost. It’s really cheap and offers very little to be disappointed in. Get its 3-year plan and it will reward you with 2 months FREE and a 45-day money-back guarantee.

Unblock Netflix US in Australia With CyberGhost >